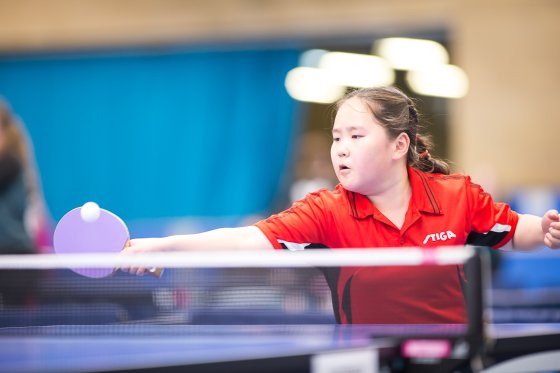 Having won the Leicestershire title in December, she along with 6 other Leicestershire champions represented our County at this very large event at Wolverhampton on Saturday 2 April.

Catherine dominated her qualifying group, winning all 4 matches, including a victory over the number 3 seed. Catherine then got a bye in the last 16 and then beat her opponent in the quarter-finals comfortably, by a score of 3-0.

Her opponent in the semi-finals was the tournaments number 2 seed, and nationally Table Tennis England ranked 8th in U13.

A game full of twists and turns, Catherine eventually won 7 consecutive points after trailing 4-8, meaning she claimed victory by the score of 11-8. An incredible comeback against the much favoured opponent.

Catherine's opponent in the Final was Alyssa Nguyen of Devon, the number 1 seed and nationally Table Tennis England ranked 7th in U13. Alyssa took the first before Catherine equalised in the second. Catherine followed this by winning both the third and the fourth sets, crowning herself the deserved champion.

Catherine is the first Leicestershire Schools Individual National Champion since Chris Rogers, who won the Boys U19 title in 1977 - a 45 year wait!

Congratulations to Catherine for this historic victory!